His workday rarely starts before 10 a.m., and he often works late into the night. A desk is irrelevant to his life; he certainly doesn’t own one. He takes his profession wherever he goes, earning his living at restaurant tables, in wine bars or in cooking schools. “Maybe my day should be a bit more structured,” ponders Björn Bittner, who has revolutionised the conservative wine scene, has 66,000 followers on Instagram, and is one of the most successful wine bloggers in Europe. From his viewpoint, a conventional office and a nine-to-five job are relics of days gone by. The 28-year-old blogger was an early user of rented office space. “As a student I had a card for a Regus Business Center. But it wasn't really worth the money,” says Bittner. He has only heard about the modern, more stylish variant of flexible rented workspace that is mushrooming in many cities.

Digital nomads, startups and creatives like Bittner belong to the coveted target group of the new working environments that are changing office property markets all over the world. And entirely new places for adding value are being created. For example, Beachub is a provider that lets people work in a top beach location. So far only in Thailand, but Costa Rica, Mexico and Bali are to follow. Of course, the main drivers of the coworking wave are almost always the largest cities. Coworking providers in London were responsible for some 10 percent of demand for space there last year, according to PMA Property Market Analysis. The situation is similar in Paris, where many small spaces are getting established, addressing their different target groups individually. For example, “Drafts – Les Ateliers Connectés” in the 18th arrondissement is targeted at designers and tech fans who develop their talents in teams to the sounds of sewing machines, laser cutters and 3D printers.

The many individual offerings have long competed with a global coworking industry. These “corporate coworking concepts” differ in many respects, but they have three things in common: they are standardised and fast-expanding and usually do not share the look and feel of small local players. That’s no coincidence. Their providers are not interested in freelancers and start-ups, and instead are eyeing major corporate clients, which can have many reasons for their interest in moving to managed space.

“People who go to a business centre want peace and quiet. People who use a coworking space want to network,” observes the Düsseldorf office letter Heiko Piekarski, managing partner of the real estate consultancy firm Anteon. The brokers at JLL also see different needs and user groups, as well as different definitions that don’t necessarily make it easy to distinguish what’s available. “Conventional business centres are generally in very good locations; their furnishings and equipment are standardised and tend to be prosaic. The focus is on privacy. In coworking spaces such as Beehive or in the many small, local operations, communication and networking take centre stage. The aim is to create a relaxed, trendy environment,” explains Helge Zahrnt, author of the JLL coworking study. Providers such as WeWork, Spaces, Mindspace and Design Offices operate across these two very different concepts. The hybrid models offer flexible use plans but often operate like clubs. Members have access to international locations and can work alone as in a business centre but also collaborate with others. Conditions vary depending on the provider; there are leases, memberships, one-off payments and package deals. The real estate investor Catella sees these concepts as a reflection of postmodern society, with pay-per-use and flexibility at work. “This follows the trend of only paying for what you actually use and keeping your options open so you can act flexibly in fast-changing markets and societies,” says Thomas Beyerle, Head of Group Research at Catella.

Coworking spaces offer numerous advantages for companies. Some use them when they need additional space in the short term or for an unknown length of time. Others temporarily move whole departments there, bringing them back to inspire others after a “creative immersion”. This inspirational effect is confirmed in a coworking study by Fraunhofer IAO. It concludes that most of the companies surveyed believe they can leverage corporate coworking to achieve a diverse array of strategic competitive edges. Each coworking model offers a unique mixture of opportunities and risks, so the study provides only initial guidance on the most appropriate model.

million people worldwide in the year 2018.

From office property to operator-run property

“Corporate coworking is a model for the future for many companies, particularly when they want to strengthen innovation,” says Klaus-Peter Stiefel, one of the authors of the Fraunhofer study. It is also a model for the future for companies that find the whole space issue to be a bother, along with the many related questions concerning design, set-up and technology. Instead of looking for a provider of office space, they go straight to an operator of coworking space. A good example of this is the IT giant IBM, which leased an entire office building in New York from WeWork in spring 2017. The deal was that IBM would use the address at 88 University Place as a complete corporate building, while WeWork designed and will manage the building. IBM pays for the space and for services – including free coffee, beer, pool tables and meditation rooms – but has less to worry about thanks to the “office-as-a-service” solution. Spotify and HSBC Bank have also been WeWork clients for some time now. A concept that will catch on? 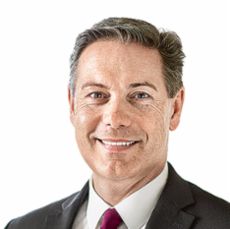 Institutionals should keep a close eye on the business plan and creditworthiness of coworking providers.

The role of owners will necessarily change when office users are subtenants instead of direct tenants and the conventional office property becomes an operator-run property. “What matters for institutional owners such as insurance companies and funds is to keep a close eye on the business plan and creditworthiness of the coworking provider. It is now the contractual party and the one that must take full advantage of the available space so it can pay its rent over the long term,” says Thomas Beyerle of Catella. Not that simple in a young, dynamic market in which the wheat has not yet been separated from the chaff. According to the Global Coworking Survey 2018, some 1.7 million people will be working in almost 19,000 coworking spaces all over the world by the end of 2018. The average coworking space now has 82 members, and almost one-quarter of spaces has 150 or more. 40 percent of them say they are profitable, according to the industry report. But not all locations will thrive, and competition is increasing. “Half of the world’s coworking spaces consider their economic prospects to be impacted by WeWork; this is positive for a fifth of the spaces and negative for a tenth of them,” says Carsten Foertsch, editor and author at “Deskmag” magazine.

Coworking will develop very  dynamically as an established  market segment.

Still, these concepts, also known as “workspace as a service” (WaaS), are increasingly visible in Europe, and the number of new studies shows that their expansion can now be measured. According to research by the real estate services provider Savills, their share averaged 7.5 percent of the total take-up of space in the first quarter of 2018 – an increase of 0.3 percentage points from the previous year and a three-fold increase compared with 2016. During the past five quarters, coworking providers all over Europe leased more than 820,000 square metres of office space, with the largest cities well ahead of the pack. The WaaS concept accounted for 26 percent of all newly leased office spaces in London, 15 percent in Paris, 10 percent in Berlin, 6 percent in Warsaw, and 5 percent in Hamburg. During the first quarter of 2018 the largest share was in Birmingham, 23.7 percent according to the experts at Savills. It was followed by Brussels at 20.5 percent (2017: 4.9 percent) and Dublin at 20.2 percent (2017: 5.9 percent).

JLL has taken a very close look at the German coworking wave. According to the JLL report “Flexible Office Space – Coworking & Co. in the Big 7,” the most recent data (June 2018) shows that flexible office space is being offered at 429 locations in the seven largest cities, while operators and owners have already signed leases for another 58. The 236 operators currently in business have opened or are planning some 764,000 square metres for 76,800 workstations. In 2017 alone, operators could supply 120,000 square metres to potential users at 62 locations. Over the next two years, that could increase to 214,000 square metres at 72 locations, according to the JLL study. This seems likely, because requests for corresponding amounts have come across the desks of firms in every major German city. There is some disagreement about the extent of the trend, however: boom or niche?

“Megatrends – Future Offices,” a comprehensive paper by ZIA (the German Property Federation), does not offer a clear answer and in fact raises a new issue: the introduction by the International Accounting Standards Board (IASB) of the International Financial Reporting Standard IFRS 16 on leases. The new method will involve considerable changes, particularly for commercial tenants, whose accounting must follow IFRS, because in the future the contracts for space in commercial buildings will financially be defined as lease agreements. This could add fuel to the coworking fires. “Even if conventional long-running leases will still exist, their share will decline considerably, not least because many companies will change their accounting pursuant to IFRS 16. The future will be the pay-per-use model for most office spaces of conventional letters and investors,” remarks Michael Belau, Managing Director Asset Management at Corpus Sireo Asset Management, in the ZIA paper.

Investors and asset managers also see the greatest growth potential here, as shown by the example of Art-Invest Real Estate. Of the 700,000 square metres of office space in Germany that the developer and investor currently has in its portfolio, 4 percent has been let to coworking operators. Along with Mindspace, Regus, and Contora, Art-Invest properties primarily house spaces of the German class leader Design Offices. That’s no coincidence, because Art-Invest holds shares in Design Offices and in fact beefed up its previous stake by a further €60 million in May of this year along with the European private equity firm EMH Partners. “EHM’s digital expertise and its skill in corporate development are particularly valuable for Design Offices,” says Art-Invest CEO Markus Wiedenmann, adding that they hope to take the company into a “new order of magnitude” over the next two years. Design Offices, founded in 2008, now offers 20 locations and 75,000 square metres of space in ten German cities.

Union Investment Real Estate also has coworking providers as tenants – and the numbers are increasing. Coworking spaces are already located in its properties in the Netherlands (the Ito and UNStudio office towers in Amsterdam), France (CityQuartier Paris-Trocadéro on rue de Longchamp) and Poland (Zebra Tower office building in Warsaw). The common feature of all locations is that they have good links to the public transport networks in each city. This also applies to the fund property The Triangle Building in Denver (Colorado, USA), 30 percent of which is used by WeWork, the coworking market leader. “We assume that coworking will continue to develop very dynamically in coming years as an established market segment,” says Cathrin Schwartz, Head of Asset Management Europe at Union Investment Real Estate GmbH.