There is scarcely another investment category that has rallied as much in recent years as property. Having spent $600 billion in 2016, investors look likely to pay $700 billion in 2017 for office buildings, shopping centres, hotels and logistics space in Asia, Europe and on the American continent alone, say international property consultants JLL. That figure is 25 percent up on the 2010 to 2014 average.

The reasons for this run on property that has lasted for seven years now have been obvious for a long time – and not just to insiders: in a world of extremely low interest rates, all types of investor – from large institutional investors down to small private savers – will be hard pushed to find an alternative that offers a comparable return to risk ratio. That is why everyone has the same battle on their hands with the well-known consequences of the boom: despite brisk construction activity, supply remains limited, which is intensifying competition among investors who are under extreme investment pressure. The knock-on effect is rising purchase prices, which conversely means that acquisition yields are falling. JLL put the global average prime yield for office buildings at the end of 2016 at just 4.7 percent. At the beginning of 2009, it was still around 7 percent. Nevertheless, 4.7 percent is still a respectable yield, considering that a top-notch government bond such as the German 10-year government bond is not even yielding 0.5 percent. And let’s not even mention Japanese bonds which, at the start of 2017, were hovering only slightly above the zero-percent mark.

How long will the boom last?

It therefore looks like business as usual in global property markets at the beginning of year eight of the boom – on the surface, at least. For example, as Union Investment’s Investment Climate Index reveals, the majority of professional real estate investors in Europe are preparing for this market cycle to last another one or two years, with basic conditions remaining unchanged. Frank Pörschke, President EMEA Markets at international property consultants JLL, believes that no one in the real estate industry is not looking at the issue of how long this market cycle is going to last: “We are all interested in how long the property market can maintain these dynamics or at least stabilise at a high level,” says JLL’s expert of the increasing uncertainty among professionals in the property business. Daniel Tochtermann, who is responsible for global property acquisitions at Credit Suisse Real Estate Asset Management, is also convinced that, “Like it or not, we are at an advanced stage in the cycle.” And Gunnar Herm, Head of Research & Strategy Europe, Real Estate & Private Markets at Switzerland’s major bank UBS, is even convinced that, “We are approaching a turning point.” 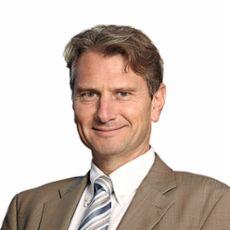 Like it or not, we are at an advanced stage in the cycle.

A whole series of facts does indeed back up this theory. For example, the rise in prices on the global markets is slowing down considerably, according to analysts at PGIM Real Estate, the property arm of US insurance giant Prudential, which has investments around the world. “Yields have already reached historic lows in many markets – and there are increasing concerns that prices are starting to overheat,” researchers in the United States observe.

That is particularly true of the European markets. For example, the average office prime yield between December 2015 and December 2016 fell again by 31 basis points to 3.9 percent, says Hela Hinrichs, who is responsible for European property research at JLL. Paris recorded the lowest net initial yield (3.0 percent), followed by Munich at 3.3 percent and Berlin at 3.5 percent. However, Hinrichs concurs with her US colleagues at PGIM, believing that yields will fall by only five basis points in 2017.

UBS strategist Herm therefore advises that investors should if possible avoid any strategy that relies on initial yields falling. His reasoning is that “interest rates will rise because quantitative easing – in other words, the easy monetary policy – of the central banks will come to an end.” The mechanism is such that as interest rates rise, yields for government bonds will also start to climb – and with them the yields that investors are looking for from their property investments.

As we know, the US Federal Reserve has already raised its key interest rates. It has also announced that it will be tightening its monetary policy in 2017 and will probably increase interest rates three more times. That has produced a textbook result: bond yields in the United States have risen and consequently office prime yields in some markets such as New York City, Los Angeles and Chicago have already moved up slightly by 10 basis points. “Further moderate rises are expected over the course of the year and also in other markets,” says JLL’s expert Hela Hinrichs. The situation in Europe is different – for the time being. The European Central Bank (ECB) is currently sticking to its more lax monetary policy and just a few months ago – in December 2016 – decided to pump billions of euros of new money into the markets. It also extended its comprehensive bond-buying programme, which was supposed to end in March 2017, to December 2017. ECB President Mario Draghi did, however, announce that from April 2017 the bank would limit the number of bonds it buys to €60 billion a month. Until then, the ECB will continue to spend €80 billion per month on purchases.

Calls within the ECB for a gradual change in monetary policy are also becoming louder. These calls are coming especially from the German central bank because in Germany – one of Europe’s comparatively strong core countries – inflation is also beginning to rise significantly. And the combination of zero interest rates and accelerating inflation is an absolutely toxic mix for both investors and savers. It is still unclear when the representatives of the Southern European countries, whose economies are still lagging behind Germany, will adopt a similar policy to the German central bank. What is, however, clear for most observers is that sooner or later a change of paradigm in monetary policy is on the cards in Europe too.

A host of uncertainties

But monetary policy is not the only thing property investors look at when trying to gauge how mature markets are likely to develop in the near future. “We live in a world of diverse challenges, highly volatile markets and numerous anomalies,” is how Martin Brühl, CIO and Member of the Management Board at Union Investment Real Estate GmbH, describes the current situation. In particular, the largely unexpected election of Donald Trump as US president – and the consequences that has for Europe and Germany – is fuelling concern. His first acts in office, especially the course he has embarked on to restrict trade, give reason to fear that economic background conditions for Europe could worsen. “Realistically we are not likely to be able to assess that until the second half of 2017,” says JLL manager Pörschke. “Until then insecurity and uncertainty will dominate the macroeconomic discussion.”

Tobias Just, Professor at Regensburg University and Academic Director of IREBS International Real Estate Business School, shares this opinion: “In the short term and seen in isolation, Donald Trump’s economic policy will probably have a positive impact on the real estate sector in the United States,” says Professor Just. But it is not possible to deduce with any clarity what impact the US presidency will have on Europe’s property markets: “If the Trump administration really does increase government spending and lower taxes, while raising customs duties, this could very well fuel inflation in the United States and Europe and increase the pressure to raise interest rates on both sides of the Atlantic.”

UBS analyst Gunnar Herm is also convinced that property investors are going to have to prepare for a phase of increasing political uncertainty. Because, as he reminds us, the new administration in the United States is not the only imponderable: another is Brexit, that is the United Kingdom leaving the European Union, the consequences of which are still unforeseeable, and added to that there are elections coming up in Europe in 2017, the outcome of which is also wide open.

Yield compression has been halted

What does that mean for the property markets? The days of low yields – combined with unabated asset appreciation – could be numbered, says UBS strategist Herm. The consequence: the comparatively risk-free interest rates for property we have seen in recent years could become an “interest-free risk”, Union Investment manager Martin Brühl warns. For the investment strategy of a professional property investor this means one thing above all: “successful portfolio management will depend on risk diversification and the ability to take advantage of global market cycles.”

Gunnar Herm from UBS has no doubt that “properties will continue to be a relatively attractive option in a multi-asset portfolio.” Because “there is a healthy supply and demand for properties.” After all, the supply of space is under control in most markets. In other words: although project developers have unquestionably expanded their activities during the boom of recent years, we have not seen the kind of excesses and unduly high numbers of speculative building projects that we saw in the run up to 2008. A glance at the global market for office projects confirms this: “New build activities will decrease again after 2018,” says JLL researcher Hela Hinrichs.

But there is a consensus among experts that this will not prevent what is known as yield compression – falling interest rates for new acquisitions accompanied by property asset appreciation – from experiencing a significant slowdown at the very least. Instead of concentrating on the appreciation of assets, “current yields will become the decisive performance factor in future,” says Herm.

A portfolio re-think is required

For an investment manager’s risk strategy this means, says Martin Brühl at Union Investment, “re-thinking how we build a portfolio.” He argues firstly that investors should consider more international property holdings. The Hamburg-based property investment company is therefore starting to look more closely at Australia and the United States. In addition, Brühl believes, a greater “mix within the hierarchy of centres” is called for. Instead of focusing solely on major global cities, where the availability of high-calibre commercial properties with creditworthy tenants and sustainable yield prospects is particularly limited, it is important to identify interesting smaller towns and cities. He sees outstanding investment opportunities in selected growth markets. “The competition is not as tough there and they offer more attractive margins than primary cities.” But there the focus would remain on high-quality buildings with long lease periods and relatively attractive risk-adjusted yields.

In order to avoid the high degree of competitive pressure that continues unabated and is likely to become a risk, especially in markets where the property cycle is already advanced and price levels are accordingly high, Brühl also sees what are known as off-market deals as a reliable option. These are acquisitions where the owners of interesting properties are contacted directly. This has worked well in Australia, but also in Japan and sometimes in Germany, Brühl reports.

A tightly organised and efficient investment management process that includes an in-depth survey of the property is, as Martin Brühl sees it, one of the most important factors in enabling investors to respond quickly to attractive opportunities in today’s market environment. For institutional investors it is therefore advisable, says Gunnar Herm, “to hold enough equity to be able to respond to any purchase opportunities that may suddenly arise.”

In mature markets, too, the established principle for property investors is: “Stay focused on the long game.” Cyclical ups and downs are primarily a sign of one thing – a healthy market – and are therefore a manageable risk.

Like it or not, property investors are also going to have to accept the fact that, in times of multiple uncertainty such as today, there is also a “fat tail risk” – in other words a sudden, unforeseeable and therefore incalculable risk. And the only thing that helps here, Martin Brühl says, is to realise that the principle of “normal distribution” is the last thing that applies to life.